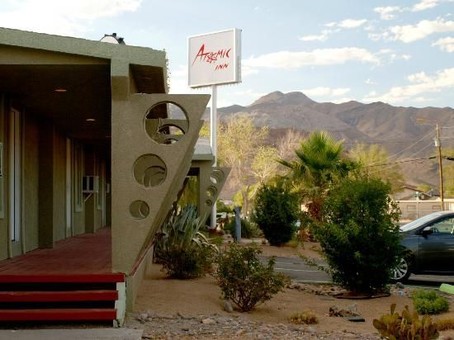 Completed in 1980, the Atomic Inn (originally the Lori Motel) was built to accommodate defense contractor and military personnel working with the Ford Aerospace Corporation who worked at military installations at nearby Nellis Air Force Base - home to top secret installations like the world famous Area 51 (Groom Lake), the Nevada Nuclear Test Site (where over 500 above-ground nuclear bomb tests were tested, and the Yucca Mountain Nuclear Waste Repository.

No wonder we call it the ATOMIC Inn! The Atomic Inn/Phoenix Inn is a retro-themed motel establishment dedicated to great value and great service reminescent of the good 'ol days when Eastern Europe was the Warsaw Pact and the United States was ready to "duck and cover"! Now a popular Death Valley motel choice, the Atomic Inn / Phoenix Inn has survived the Cold War and has been remodeled into the 21st Century yet is still a classic. Rated as #1 in Beatty out of 6 motels on TripAdvisor!!!

The Greening of the Inn

During our recent remodel - we decided to go "Green". The Atomic/Phoenix Inn washes our linens and towels from water heated by the sun with a solar water heating system that heats our laundry water often to over 200 degrees Fahrenheit. The system will pay for itself in only about 4 years! As a further step, all of our laundry is line dried in the hot Oasis Valley sun when weather permits (which is almost all of the time). Drying time is ussually less than ten minutes and our linens and towels smell fresher and last longer! In addition we use post consumer paper products in our rooms to minimize our impact on the environment. As a further step, all rooms are having dispensers installed to eliminate waste generated from individual packaging of soaps and shampoo. Ninety-five percent plus of all lighting at the Inn is either compact flourescent or LED lighting including our large signs. The entire property has been relandscaped in accordance with a xeriscaping approach to plant choices like native and non-native cactus, grass, flower, and tree species that thrive naturally in the Oasis Valley environment without using much water. Our spring cactus flower display is spectacular. No other motel in the area has gone to greater steps to "go green"